Assessment of houses in Vedic Astrology

1. The houses occupied and aspected by benefic planets or their own lords,
or planets owning auspicious houses produce completely beneficiary results
provided that they are not associated with or aspected by malefics. The same will
be the result in the case of malefics if they happen to be lords of such houses.
These good effects will be ensured in the case of all the planets when they are in
the signs of debilitation, combust and in inimical signs.

2. It is the view of learned Astrologers that the strength of a house such as
the Lagna should be adequate and the house sufficiently beneficial if the 1st, 2nd,
4th, 5th, 7th, 9th and 10th from that house are occupied by auspicious planets or
the lord of the house is free from the occupation by and aspect of malefics. The
house concerned should be considered to deteriorate in its effects if the above
houses are not so occupied and aspected. The effects will be mixed if such
positions are influenced by occupation or aspect by both benefics and malefics.

Here Mars occupies the 5th in his sign of debilitation. Inspite of the aspect
of Jupiter on Mars on the 5th house the native lost two sons and himself suffered
from a serious disease Jalodara 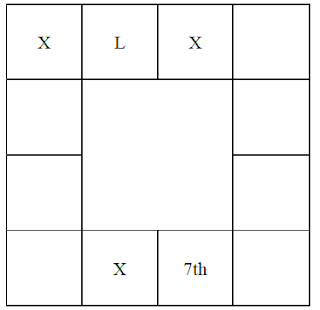 For example, we have the 7th house under consideration. Suppose Jupiter is
posited in the 6th or 8th or 12th from the 7th house. In such a position Jupiter will
not be capable of any strength to the 7th house as from any of these places he will
be unable to aspect the 7th house.

5. If the lord of the house under examination is in the 6th, 8th or 12th from
the Lagna, that house is destroyed. The same will be the results if that house is
occupied by the Lords of the 6th. 8th or 12th. The house concerned will, however,
flourish if it is aspected by a benefic.

6. A house suffers annihilation in the following circumstances :—
(1) If the house, its lord and karaka be bereft of strength.
(2) If the house, its lord and karaka are hemmed in between malefics or be
associated with or aspected by malefics and be devoid of any influence of benefics.
(3) If malefics occupy the 4th, 5th, 8th, 9th and 12th houses from that house.
There will be no doubt about the annihilation of the house if any of the two
or three conditions’ mentioned above synchronise.
Notes — For example, in a male’s nativity we have to examine the 7th
house. If the 7th house be without any strength, the lord of 7th be posited betwixt
malefics, and malefics occupy the 4th and 8th house from Venus, the first wife of
the native will definitely meet with her death.

7. If the lord of the 8th house, the lord of 22nd decanate and lords of 6th, 7th
and 8th from a house be without strength, they will cause harm to the house (its
effects) in their dasa, and antar dasa.
A house will flourish in the dasa of the following planets :—
(1) Malefics posited in the 3rd, 6th and 11th from that house.
(2) Benefits posited in the 1st, 4th, 5th, 7th, 9th, and 10th from that house.
(3) Planets which are friendly to the lord of that hosue.
Provided that the planets mentioned above are not devoid of strength.
Notes — For example see the following horoscope — Here if we examine
the position of the Lagna we will find that Saturn is an enemy of the Sun (lord of
the Lagna). Therefore there will be physical distress in the dasa and antar dasa of
Saturn. Jupiter is a friend of the Sun. Therefore there will be physical felicity in the
dasa and antar dasa of Jupiter.

8. The following planets in their dasa and antar dasa cause destruction of the
house.
(1) The lord of the 3rd house from the Lagna
(2) The lord of the 3rd house from the Moon
(3) The planet occupying the 8th house.
(4) The planet which aspects the 8th house.
(5) Saturn
(6) The lord of the 22nd decanate
(7) The lord of the house occupied by Mandi,
(8) The lord of the sign and navamsa in which the above 7 planets are
posited.
(9) Rahu, if he be weak by occupying the 8th or 12th house or by being
associated with or aspected by madefies.
Notes — In this verse it has not been made clear which house will become
the victim of destruction but in the previous verse it has been stated that houses
occupied by malefics, those surrounded on both sides by malefics, get damaged.
The same principle should apply to this verse.

9. Whichever house is occupied by the lord of the Lagna gains in prosperity
and well being i.e. it becomes very beneficient and produces very good effects.
The good effects of only such houses are enhanced if their lords are associated with or aspected by the lord of the Lagna.
If the lord of any house is posited in dusthana (6th, 8th or 12th), the effects
will be reverse. If the planet in the dusthana be weak, the effects will be immensely
harmful. If he is strong the damage will be slight.

10. In spite of the lord of Lagna being malefic, he will improve the prospects
of the house occupied by him. In addition to being the lord of the Lagna, if a planet
happens to own a dusthana (6th, 8th or 12th), the effects of his ownership of Lagna
only will prevail and not that of the other house.
For example, Mars owning the Lagna occupy Leo (Aries being the Lagna)
or Pisces (Scorpio being the Lagna) identical with the 5th house and be aspected
by a benefic, the person concerned will get sons very soon.

Matters relating to the 7th House in Vedic Astrology