Strengths of Planets and Houses – Part 3

3. A planet gets Sthana Bala (positional strength) according to position in his sign of exaltation, in his own sign, in his friend’s sign or in the six vargas.

A planet obtains one Rupa of strength in a Kendra, 1/2 Rupa in a Panaphara house and 1/4 in an Apoklima house.

4. Even if a planet be in his sign of debilitation or debilitated Navamsa, he is vested with full strength if he is retrograde and if his rays are full and brilliant.

Like the Moon, a planet will be treated as weak if his rays are eclipsed (on account of being near the Sun) even though he may be posited in his sign of exaltation, in his own or a friend’s sign or Navamsa. This means that even if the Moon be in Taurus or Cancer, if she is very near or with the Sun, she will be considered weak. A debilitated Moon when she is full (on Pooran masi night) will be treated as strong. This principle applies to other planets also.

Rahu is strong in Cancer, Taurus, Aries, Aquarius and Scorpio and Ketu is strong in Pisces, Virgo, Taurus and the latter half of Sagittarius and in Partvesha and Indrachapa when the Sun and the Moon are together in the same sign.

Notes. It will be useful to know at this stage now the position of Partvesha and Indrachapa is worked out.

(1) Add 4 Rasis 13 degrees and 20 minutes to the longitude of the Sun (Surya) Spasta. The result will be Dhooma.

(2) By deducting 12 Rasis from Dhooma we get Vyatipata.

(3) Add 6 Rasis to the longitude of Vyatipata, we will get Partvesha.

(4) By deducting 12 Rasis from the longitude of Parivesha, we will get Indrachapa. 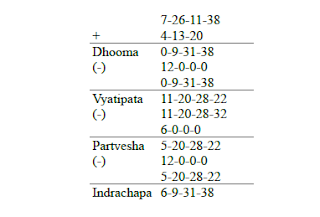 6. The first house gets one Rupa of strength if it is a triped sign. If it be Vrischika it gets 1 /4 Rupa as its strength. In any other sign the strength will be 1/2 Rupa.

The strength of the Ascendant (Lagna) is equal to that of its Lord and is very powerful when the lord occupies an Upachaya house (3, 6, 10, 11). It is also very powerful when it .is aspected by its lord Jupiter or Mercury or when it is occupied by Venus and is at the same time without the conjunction or aspect of any other planet.

The day signs are strong in births during day time and the night signs in birth during night time.

8. The planets are vested with full positional strength in the Ascendant (first house), 3/4th strength in the 7th house, 1/2 in the 10th house and 1/4 in the 4th house. This is how a distinction has been drawn by the astrologers amongst the four kendras.

9. The aspect from the 7th house is the only one that should be considered as most effective in all cases. But some learneds are of the view that the special aspects of Jupiter (to the 5th and the 9th), of Mars (to the 4th and the 8th) and of Saturn (to the 3rd and the 10th) are equally competent in producing effects in all Yogas and the like.

10. The Naisargik or natural friendship and enmity etc. of the planets is more fully effective and preferable to their corresponding Tatkalik or temporal ones as the latter is only of changing nature and not of permanent one.

12. Note the Nakshatra at birth, query or Muhurta. The Ghatikas and Vighatikas which have elapsed may be converted into Vighatikas. Divide this result by (1) 60, (2) 300 and (3) 100. The three resulting quotients are named (1) Chandrakriya, (2) chandra Avastha and (3) Chandravela respectively. Their effects are described below.

The following are the effects of the 60 Chandrakriyas:

16. The following are declared by the wise as the effects of the 12 Avasthas the Moon:

(1) Absent from one’s home, (2) Favourite of a prominent king, (3) Loss of life in slavery, (4) Distinguished for becoming a ruler, (5) Equipped with qualities appropriate for his family, (6) Sickly, (7) Becoming member of a royal assembly, (8) Fear, (9) Bitten with hunger, (10) Marriage with a young maiden, (11) Ambitious to have a luxurious bed and (12) Eating good and delicious food.

Notes: Now we give below ready made tables for finding out the Chandrakriyas, Chandra avasthas and Chandravelas.

Strengths of Planets and Houses – Part 2

Strengths of Planets and Houses – Part 4

When one can go and settle aboard? – Astrology Rules

Will JET AIRWAYS be again on Air?

When one can go and settle aboard? – Astrology Rules

Which line to opt for after 12th?