12. The person born with Amala Yoga at birth will be virtuous, will have
faith in religion, will be happy, fortunate, will be honoured by the king, have an
amiable nature and will always have a smile on his face.

Notes — Amala Yoga is formed when there is a benefic planet in the 10th.
house from the Lagna or the Moon.

14. Mahabhagya Yoga is caused In the case of a male if the birth is during
the day (between sunrise and sunset). If the Ascendant, the Sun and the Moon are
In odd signs (viz., Aries, Gemini, Leo. Libra, Sagittarius, and Aquarius).

Mahabhagya Yoga will arise in the case of a female if the birth is during the
night time (after sunset and before sunrise) when the Ascendant, the Sun and the
Moon are in even signs (viz., Taurus, Cancer, Virgo, Scorpio. Capricorn and
Pisces). In this connection see the horoscope of Indira Gandhi who was born at
night.

Kesari Yoga is caused when in a birth chart the Moon is in a Kendra position
to Jupiter.

The Moon in the 12th, 8th or 6th house from Jupiter causes Sakata Yoga.

The Sakata Yoga is cancelled if the Moon be in a Kendra position from the
Ascendant (lagna).

The Adhama, Sama and Varishtha Yogas are formed when the Moon is

15. The person with Mahabhagya Yoga will be immensely popular In the
public, will be very generous in giving gifts and will possess a very high
reputation. He will be a ruler of the earth, will have a life span of 80 years and will
be of spotless character. A female born with this Yoga will be exceedingly
fortunate and possess sweet manners.

Notes — In the case of Shrimati Indira Gandhi whose horoscope we have
given above, all the above effects were experienced by her in her life time except
that her husband was longlived. That was due to other adverse planetary
dispositions in her horoscope.

16. The person with Kesari Yoga will destroy his enemies like a lion. He will
address assembly with wisdom and in a noble manner. He will be passionate and
emotional in his behaviour. He will enjoy a long life and will attain a high
reputation and will be intelligent. He will achieve every thing by his own valour.

17. The person with Sakata Yoga at birth will be unhappy and unfortunate.
He will be unable to achieve any fame and will lead an ordinary life. Sometimes
his luck dawns and at other times it fades away.

This is the horoscope of Pt. Jawahar Lal Nehru. There is Sakata Yoga as the
Moon is in the 6th house from Jupiter but Sakata Yoga gets concelled as the Moon
is in a Kendra from the Lagna (in the Lagna itself). 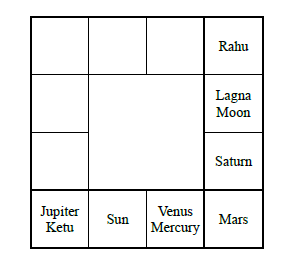 18. The person born with Varishta Yoga, will be wealthy, will possess
vehicles, will achieve fame, will enjoy happiness, will acquire knowledge and will
have intellectual equipment, modesty, ability, learning and will be generous. The
effects will be of a medium nature in Sama Yoga and very little in Adhama Yoga.

Amala yoga is formed when benefics occupy the 10th house reckoned from
the Lagna or the Moon.

If the lords of the signs occupied by the Lagna and the Moon be together in a
Kendra or be in the house of an Adhimitra and a planet endowed with strength
aspects the Lagna, the planetary disposition so formed is known as Pushkala yoga.

20. The person born with Vasumati yoga will always remain at his house
(perhaps this means that he will not go out of his native land) and he will be very
wealthy.

The person born with Amala yoga will possess lands, will be wealthy, will
be blessed with sons and will be famous, prosperous and wise.

The native of Pushkala yoga will be reverred by kings, will be renowned and
wealthy and will wear expensive clothes and ornaments. He will be fortunate, will
be a lord of many men and achieve a high status.

22. The person with Sumala Yoga at birth will be an administrator or high
official, will be reverred by king and will indulge in pleasures of life. He will be
generous, will be helpful to others and will be devoted to his kinsmen. He will be
brave and will be blessed with a virtuous wife and sons.

23. The person with Asubhamala Yoga at birth will be way ward, will be
unhappy, will torture or kill others, will be timid and ungrateful, will not pay
respect to Brahmins, will be unpopular and quarrelsome.

24. The native with Lakshmi Yoga will be constantly engaged in enjoyment
with a woman of noble temperament. He will be brilliant. He will be capable of
providing protection to his men and will be a favourite of Goddess Lakshmi (very
wealthy). He will be free from diseases. He will enjoy rides in beautiful
palanquines, horses or elephants (He will have the privilege of travelling in
luxurious conveyances). He will be generous in gifts and will be a capable ruler
favourite of his subjects.

25. The native with Gouri Yoga will have a beautiful body and will be a
friend of the king. He will possess good qualities and will be blessed with sons. He
will belong to an illustrious family. His face will be like a lotus. He will be praised
for his successes (over enemies).

26-27. If Mercury, Jupiter and Venus be in Kendra or Trikona from the lagna
or be in the 2nd house and Jupiter be in his own sign, friend s sign or in his sign of
exaltation, the planetary combination so formed is called Saraswati yoga. The
horoscope of Moti Lai Nehru illustrates Saraswati Yoga.

In this Jupiter, Mercury and Venus are in Kendra and Jupiter with Digbala is
exalted in Lagna, forming a perfect Saraswati Yoga.

The Native with Saraswati Yoga at bith will be highly Intelligent. He will be
very competent in composing prose, drama, poetry and will be learned in Alankar
Shastra and Mathematics. He will be skilled in poetry, in narrative composition and
in the exposition of sacred texts’. His fame will spread over the three worlds. He
will be extremely wealthy and will be blessed with wife and children. He will be
fortunate and will be reverred by the greatest of the kings.

28. If the Lord of the Lagna. the Sun and the Moon being in their sign of
exaltation, own sign or a friend’s sign, occupy kendra or trikona, the yoga so
formed is called Srikantha Yoga.

If Venus, the lord of the 9th and Mercury be in similar position, the yoga
formed is known as Srinatha Yoga.

If Jupiter, the lord of the 5th and Saturn be similarly disposed, the yoga so
formed is termed as Virinrhi Yoga.

29. The person with Srikantha Yoga at birth will wear Rudraksha rosaries
and his body will look white shining by besmearing the sacred ashes. He will be

30. The native of Srinatha Yoga will be wealthy, splendorous and soft
spoken. His Manner of speaking will be pleasant and witful. He will have in his
body marks of Lord Narayana (such as conch, chakra, etc.). He will, along with
other devotees or virtuous persons, be engaged in the recitations of religious songs
about greatness of Narayana. He will be devotee of Vishnu. He will be respected
by other persons. He will be very handsome and attractive and others are pleased
in coming in contact with him. He will be blessed with a virtuous wife and noble
sons (children).

31. The person with Virinchi Yoga at birth will be extremely intelligent. He
will be fully absorbed in the knowledge of Brahm. He will never deviate from the
code of conduct prescribed by the Vedas. He will be full of good qualities and will
always be happy at heart. He will have many distinguished disciples. He will be
sweet and noble in his speech and will be blessed with much wealth, wife and
children. He will shine with spiritual luster. He will be long-lived, will have
complete control over his senses and will be revered by kings.

32. When two lords of different houses mutually interchange places, that is,
they occupy the house of each other, such a disposition of planets is known as
Parivartana yoga. The interchanges of the pairs of the bhava lords will number 66
beginning from the Lagna and ending with the 12th. Out of these 66 parivartana
Yogas, 30 are caused by the lords of the 6th, 8th and 12th and are called Dalnya
yogas. 8 such Parivartana Yogas are caused by the lord of the 3rd and are termed as
Kahala yogas. The remaining 28 are known as Maha Yogas.

Tithi and Their Auspicious Event in vedic astrology

EFFECTS OF PLANETS IN 10TH HOUSE FROM THE MOON