This is the horoscope of Shri Morarji Desai former Prime Minister of India.
The Lord of the Lagna Mercury is in Capricorn (8th House). The Lord of the 8th
house Saturn is exalted in the 5th causing Parvata Yoga.

38. The person with Raja yoga will be a king or equal to a king. When sets
out on a journey he will be greeted by bands like Bheri and sounds of Conch etc.
He will have a Royal Umbrella over his head and will be accompanied by
elephants, horses, and palanquins etc. Bards and minstrels will recite poems in his
praise, He will be presented gifts by eminent persons.

The person born with Shankha Yoga will enjoy all comforts in the company
of many beautiful women.

39-41 (1) When the seven planets from Sun to Saturn occupy seven separate
signs the Yoga so arising is known as Vallaki. This is also called Veena Yoga. The
person born in this Yoga is fond of dancing, singing and playing on musical
instrumets and is wealthy.

(2) When all the seven planets are in six signs, they form Dharma Yoga. The
person born with this Yoga will be generous, a king and benefactor.

(3) When all the seven Planets are confined to five signs only, they give rise
to Hasha Yoga. The person born with this Yoga indulges in enjoyment of life, is
wealthy and of good conduct and has relatives.

(4) When all the seven planets are placed in four signs only, they form
Kendra Yoga. The person with this yoga at birth will acquire wealth and
agricultural lands.

(5) When all the planets are disposed in three signs only, the resulting yoga
is known as Shula Yoga. The person with this yoga at birth is wrathful, of violent
disposition and poor.

(6) If all the seven planets are posited in two signs only, they give rise to
Yuga Yoga. The person with this Yoga In his birth chart will be heretical and
without wealth

(7) If all the seven planets are disposed in one sign, they form Gola Yoga.
The person born with this Yoga will be Indolent, shortlived, without wealth, sinful
and will associate with low type of persons. Such a person will not be a skillful
artisan.

42. When the benefic planets occupy the 6th, 7th and 8th places from the
Lagna or the Moon, the Yoga so formed is called Adhiyoga.
The person born with Adhiyoga is a commander (Superintendent of Police
or Commander of an army), a minister or a ruler (of a District or State). He will be
renowned, prosperous, wealthy, longlived and large souled.

This is the horoscope of Sardar Patel. In this Mercury, Jupiter and Venus are
in the 7th from the Lagna and in the 6th from the exalted Moon.
There is both Lagnadhiyoga and Chandradhiyoga. 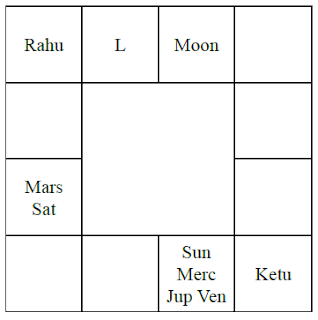 Notes— Some authors are of the view that for the Adhiyoga (from the Moon
or the Lagna) all the three houses viz.,’the 6th, 7th and 8th should be occupied by
Mercury, Jupiter or Venus. None of them should be vacant but this is not correct.
Shruti Kirti has pronounced that according to Vyas and other ancient sages
Mercury, Jupiter and Venus may be separately In the three houses or two may be in
one house and the third may be in any other house (amongst 6,7 and 8) and all the
three may be together in any of these three houses to meet the requirements of
these three houses to form this yoga.

43. The further effects of the Adhiyoga are that the native will become lord
of men, will always be wealthy, will have a large number of kinsmen and whom he
will feed and will be victorious over his enemies.

44-56. (1) benefics occupy or aspect the Lagna and the lord of Lagna not
being combust be posited in an auspicious house in his sign of exaltation or own
sign, the resulting planetary disposition is called Chamara Yoga. The person with
this yoga at birth grows (progresses) in prosperity like the Moon of the bright half
of the month and well behaved. He is wealthy, renowned, longlived and lord of
men.

(2) If the 2nd house is occupied or aspected by benefic planet and the lord of
2nd house not being combust is posited in an auspicious house in his sign of
exaltation or in his own sign, the resulting Yoga is Dhenu Yoga, the person born with

this yoga will be well equipped with gold, wealth, grains, and precious stones, and will be equal to king of kings.

Tithi and Their Auspicious Event in vedic astrology

EFFECTS OF PLANETS IN 10TH HOUSE FROM THE MOON