The profession of the native will be that assigned to the lord of the Navamsa
occupied by the lord of the 10th house from the Lagna, from the Moon and the Sun
(severally) whoever is the strongest.

Notes — It will be seen in the verse that the source of acquisition of wealth
has been limited to relations and some other persons. In ancient times when this
work was written, the sources of income were limited. In modern times the
situation is quite different. For example, it is stated that in case of the Sun the
accrual of wealth could be from father. No doubt, the Sun governs and is
significator should be taken into consideration for determining the source of
income. The same could apply to other planets. For example, if there be a strong
Moon in the 10th from the lagna. the income can be predicted from white coloured
articles (milk, pearls, silk, white clothes etc.), from articles coming out of water,
from silver, from business with foreign lands etc.

For the other part of the verse we will try to explain its meaning through a
chart.

The Lagna is Leo. The Sun is in Scorpio. The Moon is in Pisces. Taurus is
the sign 10th to the Lagna. Suppose the lord of this house Venus is in Libra 5
degrees. Then Venus would be in Scorpio Navamsas in Libra. The Navamsa of
Scorpio falls between 3°-30′ to 6°-40′. The lord of Scorpio Navamsa is Mars.
Therefore, we will take that the source of livelihood (profession) would be in any
of the significations of Mars. 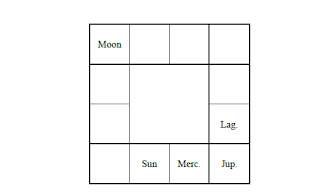 If the Sun be the strongest Leo will be the 10th sign and its lord is the Sun.
Suppose the Sun is in Scorpio-26 degrees, he will be in Aquarius navamsa
(because Aquarius Navamsa falls in 23°-20′ to 26°-40′ of Aquarius). Saturn will,
thus, be the lord of the Navamsa of the Sun. Therefore the sources of livelihood
will be in accordance with any of the characteristics and significations of Saturn.

If the Moon be stronger than the Lagna and the Sun, Sagittarius will be the
sign 10th to the Moon whose lord is Jupiter. If Jupiter is in 15 degrees of Virgo, he
will be in Taurus Navamsa (because in Virgo, Taurus Navamsa falls in 13°-20′ to
16°-40′). The lord of this Navamsa is Venus. Therefore, the sources of livelihood
will be in accordance with the characteristics and significations of Venus.

2. The sources of livelihood of the native will be through fruit bearing trees,
by the recitation of mantras, by fraud and cunningness, by gambling, by speaking
lies, through wool, medicines and the like, by working on metals or through
service under a king or respectable person, if the lord of the 10th house be placed
in the Navamsa of the Sun.

3. The sources of income or livelihood will be through trade in waterproducts
(pearls, corals etc.), agriculture and cattle breeding, pilgrimage to holy
places, service under a woman and trade in drapery. If the Navamsa occupied by
the lord of the 10th house is that of the Moon.

4. The sources of income or livelihood will be through metals, serving for
fighting battles, cooking, lands, gold, causing troubles to others, weapons,
adventure, association with wicked men, spying or through theft if the lord of the
10th house occupies the Navamsa of Mars.

5. In a nativity where the lord of the 10th house is posited in the Navamsa
owned by Mercury, the earning will be through composition of poem, study of
sacred scripture, by being a writer, or through clerical work or through tricks,
through the knowledge of astrology, through the study of Vedas, by recitation of
Mantras, through priesthood or by some pretext.

7. If the Navamsa be that of Venus, the sources of earning will be through
dependence, serving a woman (she may be wife, prostitute, queen, a film actress or
any other woman), through cows, buffaloes, elephants, horses, etc., through
teaching music or through musical performances, by singing or dancing, through
silver (sale and purchase), scents, milk, curd etc., ornaments, through silken and
other expensive dress materials, by being a companion or aides of a lady of high
standing, or by his poetic talents.

8. If the Navamsa be that of Saturn, the sources of income or livelihood, will
be through dealing in roots and fruits, by hard physical labour, through servants or
menials, rogues and through the earnings of men of low morality, through grains of
bad quality, by carrying loads, by following low kind of professions, through
sculpture, wooden materials, and by serving under a butcher.

Strengths of Planets and Houses – Part 4